Week three and final week of our first production sprint! We made a lot of progress and are all super pleased with where we are right now. So as always, allow us to give you a quick overview of what we have done the past week.

Let's start off with some programmer nitty gritty this week. During our last feedback session we were told that the characters felt too blunt to play with.  The jump wasn't instantanious enough, gravity didn't feel ok and sometimes your character would spin oddly after collision with a prop in our scene. This all happened  because we made the players using rigidbodies and colliders, something that is not recommended when making a game. Because that way your character would respond to forces it shouldn't respond to.

So our first priority was to fix this using a character controller. This allowed us to have much more control over the player and ultimately made the character move much more fluently. It doesn't spin anymore when you don't want it to, the collision is on point and jumping feels really good. The hardest part about making the character controller was definitely making the player respond to gravity. Luckily Unity has some built in functionality to help us with that.

Another remark we received was that there should be more visual feedback to the player about what is happening during the game. For example, when mom comes downstairs to check on everyone, there was no warning about this. Well, there was in code, but not on screen. So, we added some neat programmer textboxes to display a message when mom comes and leaves. The scores are also displayed now on the right bottom of the screen.

Let's talk a bit more about the mom mechanic as well. As it stands now, when our dear mommie comes downstairs, she's most likely pissed. As a result, she'll take the closest player to her that is not in the safezone (which is conveniently marked with a bubble texture at the moment) and throw him or her in the baby box. When she's gone, the others can fight again and break more stuff. The punished player is not out of the game, though! When you're in the box, you can throw bombs that create a puddle of puke (yeah) on impact. When another player walks over this, they'll be temporarily slowed. This way the punished player can still play along, although you can't acquire points from the baby box. When mom returns again, she'll take the boxed player out and searches a new victim.

Oh, and when mom is in the room, the lava disappears.

Time to get important stuff DONE!

On a more serious note, our goals were to make a clear layout of the level. We made it so that all the green-coloured objects are walkable and  static and the blue coloured objects are throwable.
Our level needed a lot more props to throw, so we continued producing them.
The powerups have their own cute little mesh. There's bears 'n kangaroos and you can find outfits for them in loot boxes. (Btw, that's our monetization plan as well, hurhur)
We now have two different playable characters. One is square, he is Juan. One is elliptical, he is Charles. One of our artists started rigging and we tried some animation on it. The rig still needs some work, but we're getting there. Learning a long the way, one step at a time. 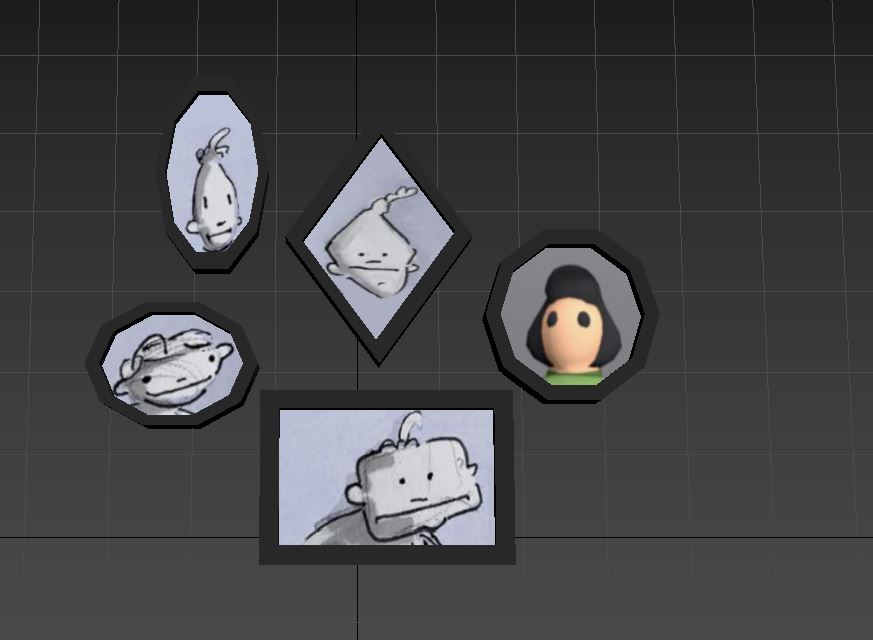 Here's a less pretty one: 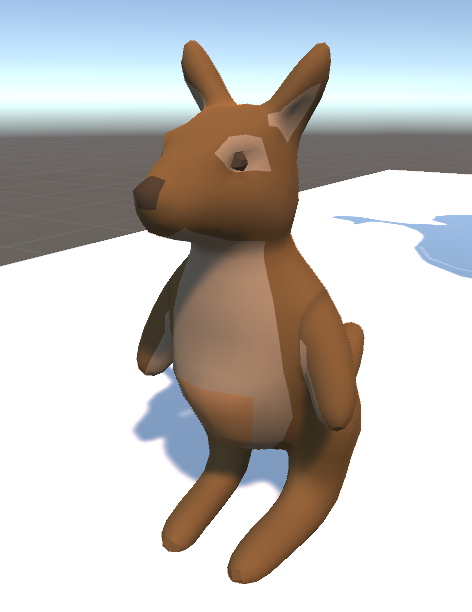